​Codecov 4.5.0 marks a major step forward for Codecov’s functionality, reliability, and usability. It is the culmination of more than 12 months of hard work to dramatically overhaul and refactor Codecov’s core components and is the first step of a larger plan to fully refactor and reimagine the entire Codecov product.
​
This release does not represent a full refactor of all of Codecov’s services, but rather marks the first point when we can release a major aspect of our refactor to enterprise users. Codecov will continue to evolve rapidly with subsequent 4.5.x version releases and will move to version 5.0.0 when the entire refactor is complete.
​
However, enterprise users are still highly encouraged to move to 4.5.x instead of waiting for 5.0.0. Far from being an intermediate release, 4.5.x will deliver tremendous value to end users all along the way.
​

​The first commit to Codecov.io was made on Aug 3, 2014. In the intervening years, much has changed in the world of web software, and while Codecov leads the charge in code coverage, it has not always been on the cutting edge technologically. It is a business imperative to disregard technical debt in the short term if it helps to speed the discovery of product market fit in the long term. As a software product, Codecov was no different in this regard. 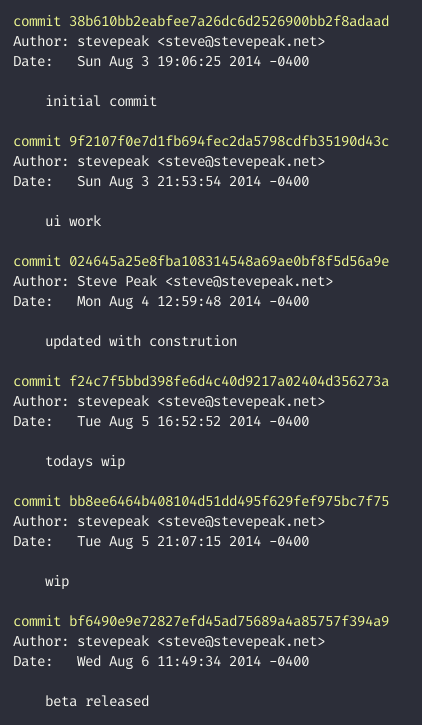 The first six commits to Codecov, from initial commit to released beta.
Codecov released that beta in only three days.

After more than five years of iteration, active development, and incredible customer growth, the time had come for us to pay the technical debt Codecov had accumulated over its lifetime. Therefore, in early 2019, we set off on a dramatic refactor operation while simultaneously continuing to ship features and improvements to our active customers.
​
At a high level, Codecov was in the following position as a product:

Projecting forward, we felt like the longer we put off a refactor to reclaim technical debt, the more insurmountable the task would become.

​How we approached the refactor as an engineering team and as a business is a separate post in and of itself. But it’s important to outline the goals of this refactor at a high level as follows:

​The most noticeable shift to enterprise is that Codecov is now delivered as two docker images instead of a single one used in a multi-modal fashion. Consider the current 4.4.x docker compose based deployment:

​
This is done to leverage Codecov’s new asynchornous queue processor: worker, which is the first fully refactored service that will ship in Codecov 4.5.0.
​
This refactored worker will bring the following changes:

​One of our core goals was to make the transition from 4.4.x -> 4.5.0 as painless as possible. For a vast majority of 4.4.x users, this upgrade will be as simple as pulling new images for the web and worker and restarting.
​
If you’re a Codecov Enterprise user that is still on 4.3.x, the upgrade path is a bit more involved, and we encourage any users in this scenario to reach out to us directly for assistance in upgrading.

For more information on the upgrade, view the release notes.
​

What if I Use codecov.io?

​There’s no need to do anything. Codecov’s new worker has been in place on production for weeks, and currently processes 100% of all production job queues. If you’re using codecov.io, you have immediate access to all of the above benefits already.
​

​Codecov has big improvements in store for this refactor, and we will use 4.5.x release major fixes, features, and changes as we move toward Codecov Enterprise 5.0.0. We encourage all of our enterprise customers to move to 4.5.0 so they can take advantage of our numerous benefits and improvements as we make our way to 5.0.0 and continue pushing the envelope on what code coverage can do for modern software development teams.

Codecov Enterprise 4.4.x will receive six months of vulnerability and critical bug patching only. Since the migration path is, in many cases, incredibly straightforward, customers will be encouraged to upgrade as opposed to waiting for patched releases for 4.4.x. However, critical issues will be addressed until Nov 1, 2020.

Give it a try